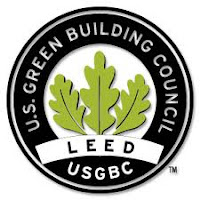 After an extensive review process of the top green building rating systems available, the Green Building Advisory Committee, established by the General Services Administration (GSA), has officially recommended that the Leadership in Energy & Environmental Design (LEED) green building certification system be used for all GSA buildings and is the best measure of building efficiency.

The Green Building Advisory Committee was comprised of private and public sector leaders who analyzed over 160 tools and systems since the effort began in 2011. It narrowed the options down to three top rating systems for the final stages of review, comparing US Green Building Council's LEED, International Living Building Challenge, and Green Building Initiative's Green Globes. The Committee concluded that LEED was the best tool available to meet the goals of the Energy Independence and Security Act.

GSA stated that the Committee considered the following when forming a recommendation:
The recommendation is also supported by a recent study completed by The Pacific Northwest National Laboratory (PNNL), which found that GSA LEED certified buildings used 25 percent less energy than the national average and cost 19 percent less to operate. GSA first evaluated certification systems in 2006, when it identified LEED certification to be used in the Federal sector.

GSA first evaluated green building certification systems in 2006,  focusing on new construction and major renovation. LEED was recommended at that time as well for use in the Federal sector.
Posted by Nichole Roth at 2:58 PM